​
​Batscar closed his eyes and took a deep breath. This time for sure! He had kept telling himself he would ask Ravensong to be his mate for nearly a moon. The deputy was always busy with something though. Maybe she was avoiding him? Not even Ebonystar could help out by pulling her out of a patrol for Batscar, Dawnblaze just happened to need help at that moment. The chocolate cat knew that the kittypet liked Ravensong too.

It was obvious and Dawnblaze didn't really keep it quiet, especially to Batscar. Dawnblaze even beat Batscar to asking Ravensong to be his mate. Luckily for Batscar, she shot him down. This time, Dawnblaze would not best the warrior. He could only hope Ravensong wouldn't shoot him down too.

Ravensong sighed after the trouble of sorting through the patrols. The black-furred she-cat was finally able to rest. She turned her head to Batscar and she smiled before approaching him. Batscar's own green eyes met hers as she approached.

"Are you going to take Oddpaw out training today or are you going to sit here waiting for hedgehogs to fly?" The deputy teased making Batscar feel embarrassed. He shifted his paws before standing up quickly.

"R-right!" He turned around and almost padded away from the she-cat's smile before he realized what he actually wanted to do today. "Actually.." He paused looking at the slightly shorter cat. He suddenly felt embarrassed again and nervous.

​Batscar's eyes drifted toward Ebonystar who watched in amusement but sent the younger cat an encouraging nod as Oddpaw joined the leader's side with wide eyes. The two cats were encouraging Batscar and their support sent a new wave of confidence through the chocolate tom's body.

"Would you like to go hunting with me. I'd like to..speak with you for a moment.." Batscar straightened himself up and puffed out his chest a little. He prepared for Ravensong to shoot him down but instead, the black cat smiled and purred.

"Of course! Lead the way." She said with eager green eyes.

Batscar nodded and lead Ravensong out of camp, taking one last glance at his apprentice who smiled. Batscar returned the smile, thankful his apprentice helped the warrior find courage.

Batscar and Ravensong ended up at Howling Rocks and Batscar just stared up at the rocks, only a jump or two above him. Ravensong looked at the tom with a mischievous glint in her eyes.

"Bat, I bet you can't get up there in one leap!" She challenged.

Batscar was taken aback at being called Bat but he was able to recover quickly and raised a paw to his chest. "You doubt me?!" He gasped with a fake hurt expression. "How dare! I'll have you know I can leap over the moon if I wanted to."

The two cats suddenly broke into laughter at Batscar's claim. After a minute or two finally, Batscar took two pawsteps back.

He ran forward and pushed his body into the air to land on top of Howling Rocks. He landed hard on his paws and it took him a heartbeat to recover as his paws ached from the hard surface but he turned and looked down at Ravensong nonetheless and smirked.

"Show off!" Ravensong teased before bunching up her legs and launching herself up at Batscar.

The two cats collided and fell off the rocks, tumbling to the ground. The two lay on their sides looking at each other with wide eyes. Then they started to laugh and got to their paws. Instead of hunting, they spent nearly all of their daylight challenging each other to different contests from racing to seeing who can climb the fastest. They even ran into one of the hunting patrols at one point made up of Dawnblaze, Butterflywish, and Ratpaw.

"What are you two doing out here?" The cream tabby asked with a cold tone. His eyes never left Batscar and the poor chocolate cat could only turn his head away from the larger cat.

Ravensong spoke up. "We're out hunting. We've been seeing who can catch more." She sent a wink toward Batscar which made him blush under his fur a bit. Dawnblaze never caught Ravensong's lie or wink as he was too busy trying to intimidate Batscar.

"Hmph. Good luck with your catches, we were just heading back to camp."

"But we-" Ratpaw spoke up before being cut off by Dawnblaze.

The patrol left Batscar and Ravensong to their antics. Once Dawnblaze was out of sight Batscar's spirits dropped. Ravensong picked up on the tenseness of the run-in and smiled at him. "Come on, let's go do some actual hunting."

Batscar nodded and followed Ravensong through the territory. Neither of them actually caught anything and eventually, it was dark and Ravensong and Batscar started to make their way back to camp. They were a little passed Howling Rocks when Batscar stopped walking and stood still under the darkening sky.

Ravensong turned around. "What's wrong Batscar?" She asked a bit confused at the sudden change in demeanor.

Batscar no longer had a smile on his muzzle, he was nervous now but he decided it was time. If he doesn't say it now he never will.

"Ravensong." The chocolate warrior said before closing the few paw steps of distance between them. "There's something I have to tell you."

Ravensong didn't move and Batscar couldn't read the expression on her face. He could only look into her green eyes and continue.

Ravensong let out a sigh. Batscar's heart started to drop until he heard her purring and she rubbed her head against his.

"I thought you'd never say those words, Batscar." She said, relieved that they had shared feelings. 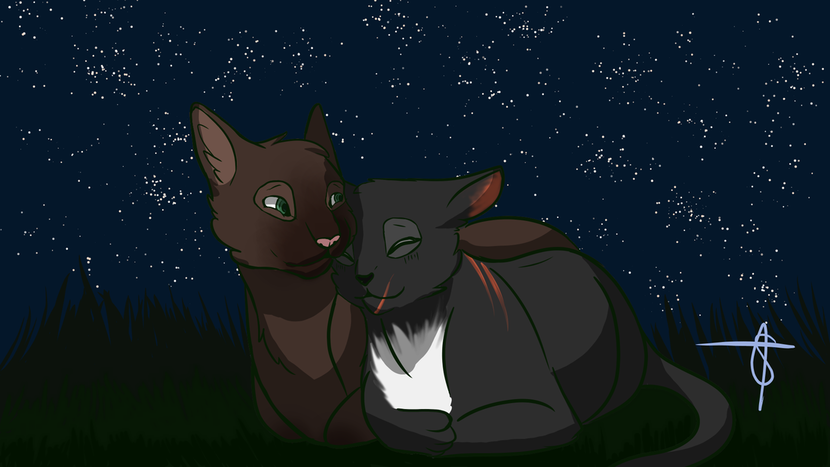